It's officially here! The second book in the New York Empires hockey romance series. ICING THE PUCK is the story of three new Empires and their journey to lasting love. You'll see some characters from previous stories as well as meet many new ones, and this time, my story isn't the only one with a paranormal twist *grin*

And look for print editions of both GOING ALL IN and ICING THE PUCK soon. 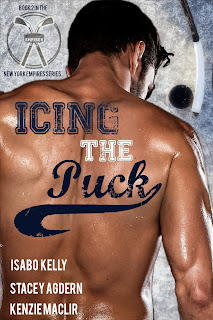 The New York Empires are back…this time three new players will find their HEA and maybe a little more.

Light the Lamp by Isabo Kelly

Geneticist Dr. Ann Bell never thought she’d have a normal life or a normal relationship. She moves to New York hoping her “Devil’s spawn” half sister can help her control the fire curse that’s haunted her her whole life. Without help, Ann fears she’ll kill someone. Finding a confusing, handsome, overwhelming hockey player was never part of the plan. But when that man proves to be someone she could love, things get a lot more complicated for Ann.

New York Empires defenseman Brody Evans never expects to find the woman of his dreams wandering the physical therapy center. He’s never met anyone like Ann Bell, and he wants more from her than any other woman before. But Ann’s keeping a secret that could tear them apart. For the first time in his life, Brody feels helpless. He’s a fighter, though, and Ann is a woman he’ll fight for, no matter what it takes.

Crossing the Lines by Stacey Agdern

Kayleigh Emerson knows that she shouldn’t get involved with a teammate of her brother’s. But the chemistry between her and rookie sensation Max St. Laurent is unmistakable.

Max St. Laurent is captivated by the talented violinist who happens to be his captain’s sister. Unfortunately, he doesn’t need his unique combination of empathy and telepathy to realize there’ll be problems if he pursues her.

But when mandatory English conversational sessions lead to a fake date that feels all too real, Max and Kayleigh must decide whether to cross the line between friendship and love.

Change It Up by Kenzie MacLir

Reiner Jahr is in his second year of playing for the New York Empires. As a boy from Setså, Norway, he dreamed of nothing but winning the Stanley Cup, and with his stick-handling skills, it’s close to becoming real. But finding out he’s the son of a god isn’t something he’s equipped to handle, and when he runs into his sister’s best friend at an event for his team, he can’t keep his eyes off her. Suddenly hockey is no longer the only thing on his mind.

Emma Chase loves her job with the local Special Olympics organization. Coordinating an event with the New York Empires has been a dream come true. Until she sees Reiner Jahr, her best friend’s big brother. Her teenage crush has developed into so much more. Seeing him again brings all her youthful feelings racing back. Their meeting sets in motion a chain of events that will forever change her.

What can they do when changes happen both on and off the ice?